Measuring the Speed of Gravity (Waves)

Newton’s equations give the speed of gravity as infinite. For example, in Cartesian coordinates, suppose a gravitating mass 2M is at the origin up until time t=0.  At that time, the mass splits into two masses of mass M, one going in the +x direction at speed v the other in the -x direction at speed v. For times greater than 0, the gravitational potential is given by the sum of the two gravitational potentials:

At any distance, the above depends on t so the gravitational potential (and it is easy to show the gravitational force) is instantaneously changed at all distances from the origin. The speed of gravity is therefore infinite in Newton’s theory.

In the weak field limit, Newton’s law of gravitation needs to match Einstein’s law. Given that the two theories postulate a speed of gravity that is widely different, it is a little surprising to find that they match fairly well. Rather than going into this, let me instead link in a simple discussion of this by Steve Carlip on Baez’s website.

For example, from a Kaye and Laby article on sound speeds, here are the speeds of longitudinal and transverse sound waves for some common materials in meters per second: 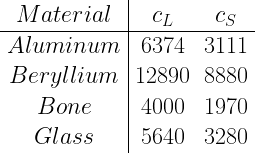 In the earth, longitudinal waves are known as P-waves, while transverse waves are S-waves. The P stands for “primary” and S for “secondary”, since the longitudinal waves travel faster and arrive first. Geophysicists sometimes remember these as P standing for “push” and S standing for “shake”. The rule is that the first earthquake wave you feel will move the earth back and forth in the direction of the earthquake’s center, and the secondary waves will move the earth back and forth perpendicular to the direction of the quake center. More complicated waves can travel near the surface of the earth. See L Braille’s website at Purdue University for nice pictures.

If one knows the stress strain elasticity tensor and all that for a classical infinite isotropic homogenous 3-dimensional solid, one can verify that medium supports two wave types, transverse and longitudinal, and that the speed of the longitudinal waves are greater than the speed of the transverse waves. The calculation uses tensors and is shown in section 5.5.4 of these engineering class notes by A. F. Bower at Brown University. One finds that:

is the mass density, and

From these arguments, classical physicists saw that a Poisson ratio for the aether of 0.5 would give longitudinal waves with an infinite speed. This matches the speed of gravity for Newton’s equation, so most of their theories assumed that Poisson’s ratio for the aether was 0.5.

Jupiter and the Speed of Gravity

At this time, no gravity waves have been observed. Since we haven’t seen the waves, it would follow that we haven’t measured their speeds. However, a few years ago this point was debated in the literature at some length. Clifford Will’s review article on tests of the general theory of relativity, Living Rev. Relativity 9, (2006), 3 tells the story:

In 2001, Kopeikin [152] suggested that a measurement of the time delay of light from a quasar as the light passed by the planet Jupiter could be used to measure the speed of the gravitational interaction. He argued that, since Jupiter is moving relative to the solar system, and since gravity propagates with a finite speed, the gravitational field experienced by the light ray should be affected by gravity’s speed, since the field experienced at one time depends on the location of the source a short time earlier, depending on how fast gravity propagates.
…
However, several authors pointed out that this 1.5PN effect does not depend on the speed of propagation of gravity, but rather only depends on the speed of light [16, 288, 233, 51, 234]. Intuitively, if one is working to only first order in v/c, then all that counts is the uniform motion of the planet, Jupiter (its acceleration about the Sun contributes a higher-order, unmeasurably small effect). But if that is the case, then the principle of relativity says that one can view things from the rest frame of Jupiter. In this frame, Jupiter’s gravitational field is static, and the speed of propagation of gravity is irrelevant. A detailed post-Newtonian calculation of the effect was done using a variant of the PPN framework, in a class of theories in which the speed of gravity could be different from that of light [288], and found explicitly that, at first order in v/c, the effect depends on the speed of light, not the speed of gravity, in line with intuition. …

There are many arXiv articles on the debate. With no less than four fairly entertaining “comment on” articles. At this time it appears that the “no measurement was made” side has the upper hand.

In 1987, the supernova SN1987A was detected in our local galactic neighborhood. Supernovas are expected to produce vast quantities of neutrinos, and it was very satisfying to see that neutrinos from this explosion were detected at roughly the same time as photons. These sorts of experiments, where the same event is observed with instruments that detect different particles, are some of the most useful for verifying models of physics. In the case of SN1987A, observations showed that the massive neutrinos arrived a few hours before the massless photons. The delay is due to the fact that neutrinos interact only weakly with matter and so can escape from the center of the supernova faster than photons.

If an astronomical event produces both photons and gravity waves, and these two waves travel at the same speed, then we may be able to detect them approximately simultaneously on the earth. So the gravity wave experimenters have set up a system whereby whenever there is something interesting is observed by the photon astronomers, the data from the world’s various gravity wave experiments are compared to see if there is a coincident signal. If the gravity wave arrives early or late, this would be a good test of many theories of gravity.

The expected value of the peak noise (i.e. the best fake gravity wave that noise can put together)scales as the square root of the time one observes. To reduce the chance that a signal is just noise, one can look for coincidences between different detectors and for coincidences between gravity wave detectors and telescopes or neutrino detectors. Since these coincidences greatly reduce the time that the gravity wave detector is on, they also greatly the expected value of the peak noise (signal) expected, and this increases the sensitivity of the detectors.

Kea (Marni Sheppeard), is blogging the General Relativity & Gravitation #18 conference. A few days ago she posted the following report:

The new, preliminary S5 result of most interest is for GRB 070201 in the galaxy M31. Images show the source region overlapping the spiral arms of M31. This burst duration was around 0.15 sec with a secondary pulse of 0.08 sec, and it was observed using two Hanford LIGO detectors. No GWs detected. The conclusion is that it is quite unlikely the source can be associated to M31 at all, and an upcoming paper will include minimum distance estimates for the source (based on the assumption that gravitational waves exist).

This is interesting in that it may be the first evidence that the speed of gravity waves is not the same as that of light. The next few years could see an interesting debate between the gravity wave observers and the observers of photons and neutrinos. [edit]The paper is now out: Implications for the Origin of GRB 070201 from LIGO Observations. Interestingly, they write “We also implicitly assume that the propagation speed of the gravitational waves is the speed of light.”

, which matches the superluminal speed implied by the 3-dimensional analog to Feynman’s checkerboard model of the electron. But discussing this would take us too far from the subject at hand.

Suffice it to say that I expect that the gravity wave people will eventually detect gravity waves, but that these will not correlate to any simultaneous astronomical events. Given the astronomical distances, any significant difference between the speed of gravity and the speed of light will separate the signals by such a long time that we on earth will have great difficulty correlating them. I believe that the gravity waves will arrive first, so if it were possible to accurately determine the arrival direction of the wave (it is not with present technology), then those directions will point toward astronomical objects that seem likely to someday produce gamma ray bursts or neutrinos.

[edit]If gravity waves from a pulsar are detected, and gravity waves are slower than c, then it will be possible to get a good estimate of the speed of gravity by taking into account the rate of spin-down of the pulsar. So an interesting search would be to look for pulsar like signals in the gravity wave data, but with frequencies other than those observed in pulsars nowadays.[/edit]

34 responses to “Measuring the Speed of Gravity (Waves)”