I should be preparing for my 10 minute lecture on classification of hadrons at the American Physical Society’s Northwest meeting on Saturday, but instead I am reading Gerard ‘t Hooft’s beautiful introduction to quantum field theory, The Conceptual Basis of Quantum Field Theory. I like the approach of this book because it concentrates on what I think of as the heart of quantum field theory, Feynman diagrams. 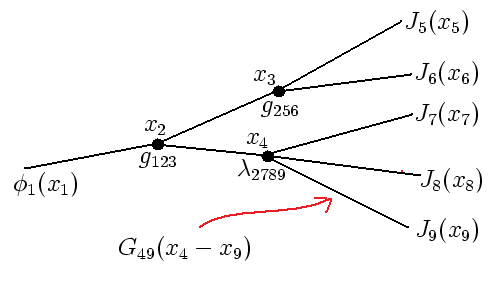 In the above, the points each correspond to a single point in spacetime. These points are labeled

in the above is a propagator, the Green’s function. Each of the legs carries one of these. The

are included for the 3-point and 4-point vertices. They are coupling constants. Uh, I’ve been sloppy in the above, please refer to the ‘t Hooft paper for details.

‘t Hooft’s approach to quantization is to discretize spacetime; that is, to replace the continuous points (which support differential equations) with a discrete set that is sufficiently dense to allow the differential equation to be modeled. My lecture on Saturday will be a little similar to this. Rather than working with an approximation to the classical field I will be looking at the solution to bound state problems on a finite number of points. I will begin with the hydrogen atom and then move to the equivalent problem on 2 and 3 discrete points. I discussed this on the blog a few weeks ago, quantum bound states, the hydrogen atom.

In its present form, superstring theory appears to have turned into a collection of wild ideas called M-theory, whose foundations are still extremely shaky. Some of the best minds of the world are competing to turn this theory into something that can be used to provide for reliable predictions and that can be taught in a text book, but this has not yet been achieved.