. Weak hypercharge is a U(1) quantum number; it has only one generator and therefore is commutative. Weak isospin arrives in two representations, singlets and doublets. The singlets have weak isospin quantum number of 0 and so we can represent them with any sort of 0. The doublets have spin-1/2, which we represent with the Pauli spin matrices: 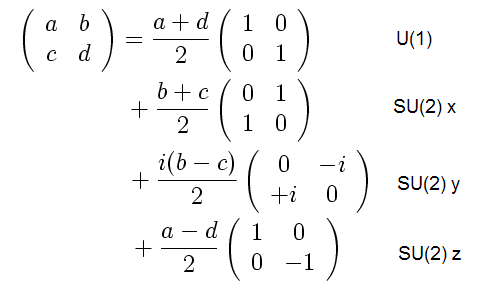 Given a normalized quantum state vector (a,b), the density matrix representation of the state is a 2×2 matrix:

Similarly, given a U(1) state

, we can convert it into a 2×2 matrix. For qubits, such a (pure) density matrix would be boring, it would only be the unit matrix. But for wave functions that depend on position, the density matrix is not trivial and contains the relative phase information of the quantum state (which is the only phase information that is physical). But for this post, simply note that 2×2 matrices are rich enough to contain both types of quantum numbers. A density matrix is partially characterized by the fact that it is idempotent, that is,

. This characterization is not complete in that the equation has other solutions, in this case

. These other solutions have trace 0 and 2, the usual pure density matrix has trace 1. It turns out we need these other solutions so their having the wrong trace is an issue. Further down we will show how to convert the traces to 1, but for now let us postpone the discussion.
END_OF_DOCUMENT_TOKEN_TO_BE_REPLACED