I visited the University of Washington bookstore a week ago and they had a copy of the new translation of Táin_Bó_Cúailnge (The Tain) by Ciaran Carson on sale for $5.98 in hardback, so of course I bought it. 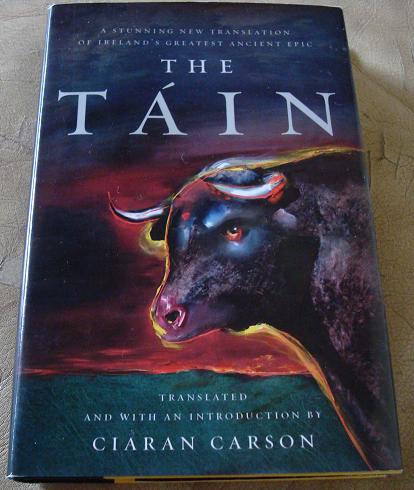 If you’re unaware of this classic, I’ll type in a page. For context, Cu Chulainn is returning to his own village after killing three of the village’s enemies. Perhaps due to post-traumatic stress disorder, or maybe blood-lust, he’s now a bit berserk and needs psychiatric attention.

“There’s a man approaching us in a chariot,” cried the look-out in Emain Macha. “He’s got the bloody heads of his enemies in his chariot, and a flock of wild birds overhead, and a wild stag hitched behind. He’ll spill the blood of every soldier in the fort unless you act quickly and send the naked women out to meet him.”

Cu Chulainn turned the left board of his chariot towards Emain to show his disrespect, and he said:
“I swear by the god of Ulster, that unless a man is sent to fight me, I’ll spill the blood of everybody in the fort.”

The women of Emain came out to meet him, led by Mugain, the wife of Conchobar Mac Nessa, and they bared their breasts at him.

“These are the warriors you must take on today,” said Mugain.

He hid his face. The warriors of Emain grabbed him and threw him into a barrel of cold water. The barrel burst to bits about him. They threw him into another barrel and the water boiled up till it seemed it was boiling with fists. By the the time they’d put him into a third barrel, he’d cooled down enough just to warm the water through. Then he got out and Mugain the queen wrapped him in a blue cloak with a silver broach in it, and a hooded tunic. She brought him to sit on Conchobar’s knee, and that was where he sat from then on.

“Is it any wonder,” said Fiacha Mac Fir Febe, “that someone [Cu Chulainn] who did all this when he was seven should triumph against all odds and beat all comers in fair fight, now that he’s reached seventeen?”

Some notes
Cu Chulainn is a national hero to both sides of the border in Ireland. The famous statue of his death appears on the 1966 10 shilling coin: 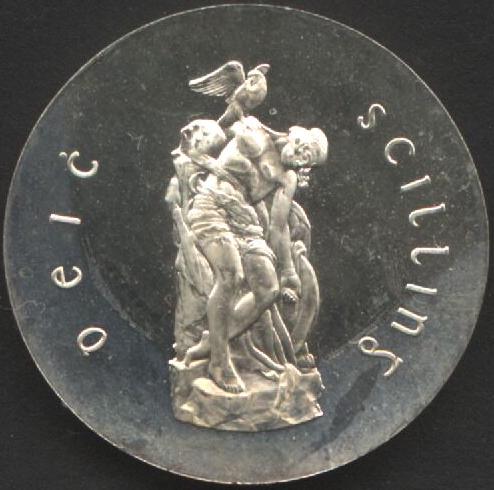 Chariots appear prominently in The Tain but there’s at least some argument about whether these existed in Ireland. I have little doubt, see this page for a discussion and illustration. For the wealthy, imagine a chariot hooded with expensive colorful cloth. For the very wealthy, imagine the cloth covered further with bird feathers. The warrior is right handed and stands on the right side of a chariot, so the left side is the unarmed side. Hence the disrespect. Perhaps this has something to do with why the British drive on the left side of the road; they’re showing respect from the days of chariots.